DEEP in the North American wilderness, a monster is terrorising the terrain of Idaho’s back country - a 6x6 hearse

Built by master mechanic and Naples, Idaho-native Jimmy Driver, the 10ft high, 20,000 lbs beast known as ‘Mortis’ has been causing a stir in the local community.

Supported by six massive 60-inch tires, Mortis was assembled entirely from scrap parts, including the chassis of a 1967 Cadillac superior, as well as parts from school buses and tractors.

Jimmy told Barcroft TV: “I’ve had a passion for cars for 30 years. I have been mechanic-ing, helping my dad since I was a small kid and I just continued on building and working on them on my own as I grew up.

“All we had to work with was a ’67 Cadillac hearse and an old deuce and a half frame with some axles.

“We slid them together with the help of a few friends and a little bit of welding and made us a mud bogger.”

The hulking hearse was designed so Jimmy could compete in local mud bogging competitions, which sees vehicles of all types being driven through tricky mud courses.

Or, as Jimmy puts it: “Mud bogging is pretty much a bunch of rednecks getting around a mud puddle and stirring it up with their 4-wheel drives, having a good time, burning gas, and drinking beer.”

The carpenter and mechanic lives an off-grid lifestyle in Naples with his family, in a custom-built house that relies on a generator for power.

Mud bogging provided Jimmy with a fun hobby to pursue during the freezing Naples winters, and once he tried it out, he quickly realised he needed a vehicle that wouldn’t keep getting stuck.

“I bought [the hearse] originally for 600 dollars,” he explained. “Did a little work to him, and drove him from Utica, Mississippi To Naples, Idaho.

“I was then pulled over four times in two weeks. That could have been harassment or just damn fine police work.“

Back in 2004, once Jimmy got the Cadillac home, he began modifying it to suit his mud-bogging needs – an ongoing process that has continued throughout the last 14 years.

At times, that process has involved some seriously impressive improvisation, with Jimmy and his wife, Leah, moving the 6v 53 Detroit Diesel engine to the middle of Mortis to help with weight distribution, and running the exhaust out the back window.

Leah, who recalls spending date nights working on Mortis, says that the project has been a positive experience in that it has brought friends and family together.

She said: “You know [Jimmy] likes to have fun with it, so working on Mortis just always brightens his day, getting to come home and tinker on it with friends.

“I am so proud and being a part of it has been amazing.”

The result of Jimmy and his friends’ efforts has caught the attention of locals and tourists alike, with many stopping for photos whenever they see Mortis out in the local area.

Jimmy said: “I had parked it at my dad’s before, and they actually stopped a train so that the engineer could run over and take a photograph of it.”

Because of its imposing physicality, the beast itself will only reach speeds of up to 12 mph. But the monster hearse’s huge build and slow crawl is perfect for traversing the rocks and mud bogs of rural Idaho.

Jimmy added: “The fact the car sits high off the ground, you can’t really see anybody. We are working on that where maybe I can communicate with people and not accidentally crush anything – crushing on purpose is different though.”

Despite sinking around $15,000 into Mortis, Jimmy estimates that it’s probably only worth around $500.

But money is the last thing on Jimmy’s mind. The mechanic is happy to have the experiences Mortis brings and continue working on his creation with friends.

“I don’t think I will get rid of mortis,” he said. “I am just enjoying it, I just don’t see me getting rid of Mortis no matter what [anyone] offered.

“I don’t really like money that much, seems to distract me from the fun. So I stay away from that as much as I possibly can. I don’t focus too much on it.” 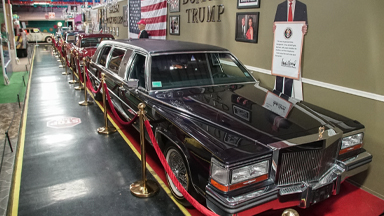 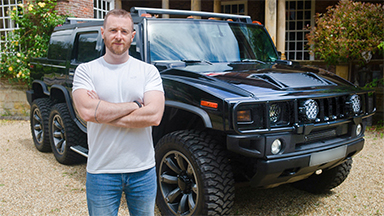